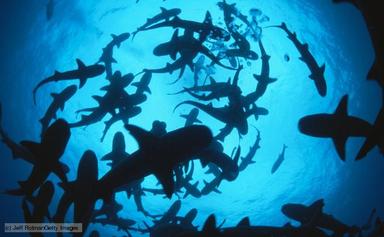 The class Chondricthyes contains sharks, rays, skates and a few uncommon fishes such as saw fishes and chimaeras.

Body Plan- Their entire body made of cartilage not bone and has jaws. Most of them have tooth like scales covering their body. They have curved tails, torpedo shaped bodies, paired fins and pointed snouts with mouth underneath. One of the most noticeable characteristic of sharks is their teeth.

Respiratory System- they also have gills

Circulatory System- They a closed circulatory system and have two chambered hearts. Atrium and ventricle, the blood flow is maintained by low pressure in pericardium and constant swim motion

Excretory system- they are tolerant of their own nitrogenous waste, kidneys flush it out. They also have high body concentration to combat water loss.

Nervous System- they have 5 parts brain which includes the highly developed olfactory region. The cerebrum and cerebellum which control the primarily process of sense of smell and coordinates body movements. They have excellent auditory and low light detecting receptors.

Digestive System- Almost all of them are predators but few exceptions like basking shark are filter feeders. The food is swallowed in chunks.  A linear digestive tract is also present.

Reproduction system- Development is usually live birth (ovoviviparous species) but can be through eggs (oviparous). Some rare species are viviparous. There is no parental care after birth; however, some Chondricthyes do guard their eggs.

Movement- For example streamlined body and paired fins, move by moving tail and trunk side to side

Behaviour- Many cartilaginous fishes are social, and are found in aggregations or true schools, sometimes including thousands of individuals. Even species thought to be primarily solitary, such as the Great white shark, form aggregations of the same individuals that may seasonally reappear at given sites each year. When not feeding or swimming, many skates and rays cover themselves with a thin layer of sand and spend hours resting on the ocean floor.