Class Agnatha
Body Plan- Absence of true teeth, limbs, and jaw. The skeletons of this class are made of fibers and cartilage. Instead of a backbone, they have notochord as adults and have unpaired fins.
Respiration- They use gills to respirate.
Circulatory System- They have a closed circulatory system and have 2 chambered hearts
Excretory system- The kidneys not only sends that waste out of the body through the anus, but in sea lamprey, they play a key role in keeping the amount of salt in their body regulated. These creatures live in both the oceans, which are salt water, and rivers, which are fresh water. The kidneys must work to maintain a balance of salt when in freshwater. When the fish is in salt water, the fish's gills work to keep excess salt out.

Reproduction system- Fertilization in lampreys is external. Most species are hermaphrodites. The larval stage is one of a filter feeder, spend 5 to 6 year as larva from their 7 year life span.  Lampreys reproduce in freshwater riverbeds, working in pairs to build a nest and burying their eggs about an inch beneath the sediment. The resulting hatchlings go through four years of larval development before becoming adults.

Digestive system-  The class Agnatha is parasitic, for example lamprey use their sucker like teeth to attach itself to the prey , rasps a hole in the body with a rasping tongue and sucks out the body fluid. Filter feeders as larva and parasitic as adults.

Nervous System- For instance hagfish have light detecting sensors scattered around their body but lack eyes. But lamprey has well developed eyes.

Movement- Lampreys swim in a rippling manner. For they lack a jaw, there is no movement of the mouth. 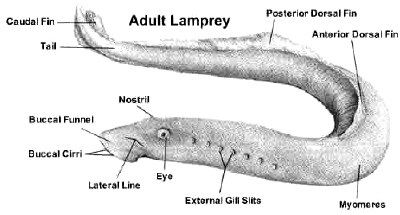